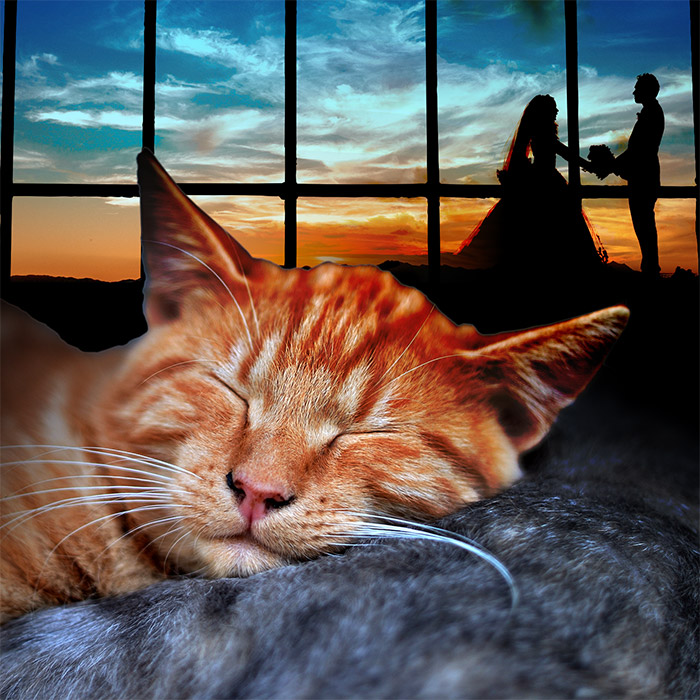 The Internet had its hair on edge today when the news came out that Jed the cat slept through the entire wedding of his owner Susan and her dashing groom Charles. Outrage was the theme as comment after comment was posted that Jed was seen sleeping soundly from the moment the wedding started all the way until late into the reception. A few posts did mention that this must have been a momentary lapse in behavior for a cat that had, up until now, served as a loyal companion to Susan for 12 years.

Here at Fake Cat News we take pride in our feline like pursuit of the truth and in this case we sensed something was fishy. So I took my team down to New Martinsville West Virginia for a look around. What we uncovered was yet another reason why you should never believe what you read on the Internet.

Several eyewitnesses to the wedding preparations the night before told a story of mayhem and a heroic cat many call Jeddypie.

According to one witness it all started the night before the wedding. Susans brother Steve had dropped off a case of his home brew for the reception about a week before the wedding and left it on the workbench in the garage.

This was not just any garage. To a hound dog named Friar this was sanctuary. A simple oversized pillow and a well kept garage brought Friar a sense of peace and quiet away from the chaos of the main house.

It was not Susan’s 3 sisters. It was not the nieces and nephews. It was not even the cat or that infernal parrot that tore away Friar’s inner peace. The true culprit was the catering company that Susan ran out of her home called Smooth Sailing Dining Services.

Sure Friar knew that Susan’s customers experienced exactly what the name implied. Hot food arriving just on cue blooming with colorful presentation.  He also knew that the food was delicious because he would occasionally sample some when he could steal a chance.

What happened behind the scenes was a different story entirely. The act of creating the food looked a lot more like pure mayhem and destruction along with the panic that comes with it. Susan and her team would have crazed looks in their eyes as if in battle. Plates crashing to the floor, timers buzzing, phones ringing, pans smoking, fire alarms ringing in a desperate attempt to meet the deadline. So Friar learned that it was in his best interest to lay low in the garage.

On this day the house was actually rather calm. While it was true that a wedding at this very house was in the final stage of preparation. That was nothing compared to the mayhem involved with cooking for 80 people. Nevertheless Friar prided himself with being predictable so he spent most of the day on the pillow in the garage anyway.

Right above Friar’s head there was an explosion that shocked him to the core. As he jumped into the air more explosions started happening. Friar’s body corkscrewed as he twisted his head towards the garage door. His feet landed and clawed the concrete floor as he lunged to escape the ear popping noise.

As he burst through the door into the kitchen the last of Susan’s brother Steve’s homebrew bottles in the garage exploded with a bang. Unfortunately Steve had put too much sugar into the bottles leading to over carbonation causing their caps to pop off with a bang.

None of this mattered to Friar as he careened through the house running for his life. It did matter to Susan’s niece Jenny who was in the den creating a paper mache pinata for the wedding.

Jenny was holding a huge red balloon halfway covered with wet glue soaked newspaper. Usually she would have used starch but there was none available so Jenny improvised and made a mixture of water and glue she found in the toolbox.

Friar came flying around the corner and jumped over a laundry basket. Before he could change course he landed right into Jenny and the balloon.

In one desperate motion Friar jumped directly onto Susan’s bed where her wedding dress had been lovingly displayed for a wine fueled session of show and tell.

Accounts of the immediate aftermath of all this are conflicting and paint a picture of abject chaos. The gown was ruined. The mix of dog hair, newspaper, and glue spelled the end for what had been a delightful dress.

All the sisters rushed around the house panicking about ways to save the dress or find a new one. The wedding was just hours away.

All of this was not lost on Susan’s cat Jed. He had just barely jumped out of the way as Friar burst out of the garage. He had almost gotten stepped on several times in the melee of activity following the destruction of the dress. Worst of all it broke his heart to see Susan crying about the wedding day she knew to be ruined.

Through the night as the ladies went through various stages of planning and panic Jed tried to sleep. He was never successful because it seemed that every place he tried to lay down would eventually be in the path of one of the sisters as they rushed franticly around the house.

Jed climbed up on a wardrobe in the upstairs guest-room and prepared to get some sleep. He thought about Susan and her wedding. He had been looking forward to it though he had his doubts about her fiance Charles. Regardless she would look beautiful in her gown.

That was it! The wedding gown! A far away memory ran back and jumped into Jed’s furry little head and reminded him of when he was a kitten. One day when susan was much younger she took Jed up into the attic. Susan took a beautiful white gown out of a box and tried it on. Susan’s mother’s dress was way too big but when the sun came through the attic window and hit her hair she looked like an angel.

Jed knew what he had to do. From the top of the wardrobe he could see the ladder to the attic folded up into the ceiling. He got into a crouch and fixed his eyes on the short piece of rope hanging from the bottom of the ladder. Then like an electric bolt of determination and fur Jed shot into the air. Time seemed to slow down as he flew towards the target with his paw out – claws stretching towards the knot tied at the end of the rope.

Suddenly he was in real time again as he dug his claws into the rope. He swung wildly gripping with all he had. Slowly he stopped swinging but the ladder did not budge. His strength was quickly giving out when suddenly there was a creek from above and then the ladder slowly began to drop down from the ceiling bringing Jed slowly down to the floor.

Jed quickly ran up into the attic. It was darker than he remembered but he could see the plastic container containing the gown stacked high up on a pile of boxes. Jed started to scale the mound towards the gown when his foot knocked a jar off a shelf that crashed to the attic floor in an ear shattering racket.

Jed could hear that the noise alerted Susan and her sisters in the house so he knew he needed to act fast. He made the final scramble up to the plastic box containing the gown and just as he reached out to the box his back paw slipped. Instinctively Jed reached out towards the box to catch himself but only succeeded in ripping the box from it’s perch and sending it hurling into the air. The lid flew off as the container flew head first towards the hole in the attic door. Susan and her sisters, looking up from below, saw as the container got stuck in the door and the gown launched towards them.

The gown unfurled in the air and drifted gently over Susan’s head. As she brushed the soft fabric away from her eyes the rays of the morning sun came through the window finding Susan, revealing beauty, and bringing hope.

A few hours later Susan, in her mother’s gown, walked out of the house into the garden to be married. As Jed curled up to finally get some sleep he thought about Susan in her dress. It reminded him of that day in the attic 11 years ago but this time she was more beautiful.

The ceremony was a huge success though the catering company they hired stumbled along the way.

When they exchanged vows it was as if the sun could not stop looking at that dress. Charles looked sharp as ever. And at their feet sat Friar wagging his tail and grinning from ear to ear.

Sunday finally arrived and all the preparations were complete. The carpet was freshly shampooed and the walls, trim, ceilings,